The road back to school after spinal cord injury 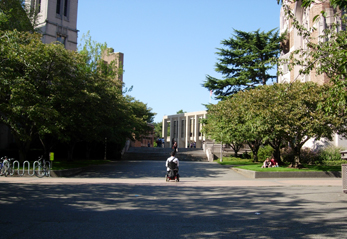 Aditya Ganapathiraju on the University of Washington campus where he is a full-time college student.

My journey from hospital bed back to the classroom has been gradual, sometimes bumpy and often challenging, but ultimately it has been immensely rewarding and worthwhile.

The first three years after injury were a low point for me. After discharge from rehab I lived in a series of adult family homes in which I felt pretty isolated from the world. My circumstances at that time made returning to college impractical and frustrating—too far from campus; no transportation or driver; frequent health problems and hospitalizations—but I still kept the thought of school in the back of my mind and was hopeful that my life would start turning around once I returned. But in the meantime, I spent most of my days during those years in a television-induced stupor.

Then in the spring of 2005 a great opportunity to improve my living situation came along and I seized it. The family of a young quadriplegic who lived near Seattle thought it would be mutually beneficial for me to come live with them. So I moved in, and shortly after applied to the University of Washington.

I went online and downloaded the college application forms, marked down due dates, and contacted my old community college and high school for transcripts. I couldn’t write on my own back then so friends and caregivers helped fill out forms for me.

Lucky to have done my rehab at the UW Medical Center, I was able to work with the vocational counselor there, Curt Johnson. He set me up with the people at the Disability Resources for Students (DRS) office, who assisted me with some of the needed accommodations like note takers and textbook scanning. I applied for financial aid from the Division of Vocational Rehab in order to qualify for funding for assistive technology (AT), such as a voice dictation program. I also filled out the Free Application for Federal Student Aid (FAFSA) online with help from my uncle, who was in Seattle temporarily for a sabbatical. I didn’t get much FAFSA help at first so DVR stepped in to cover tuition and AT.

After the move out of the adult homes I found a full-time caregiver with the help of friends, paid for by the Department of Social and Health Services (DSHS) through the COPES program, which allows for independent hiring of caregivers. My caregiver Danielle, who later became a good friend, helped me get through the application process, all the while encouraging me to be more independent in my daily activities.

Despite the help I received, starting classes again was stressful. I worried about numerous little details, which of course didn’t seem so little at the time. How was I going to take notes? How would I write in class? Take tests? Study? What about my personal care at school? My health issues? This was my second chance at college and I wanted things to go well.

I decided to start back gradually and only took one class my first quarter. Always a fan of thinking about things (known as anxiety in some circles), I quickly rediscovered that school consisted of more than academics – it was a social setting that I had been completely detached from for three years. This, along with my new physical situation, brought up some unique challenges.

For example, for the first few quarters I was terrified of getting sick in class. This was no idle worry as I was experiencing significant nausea most of the day and was often unable to keep down my breakfast. I started hiding a garbage bag tucked in-between my leg and the armrest anticipating that very thing, which came in quite handy on those long bumpy rides to school.

Danielle, who drove me to campus, accompanied me to class in the beginning but wasn’t always able to make it. Getting sick in class was bad enough, but what if it happened without my caregiver there to help me? This terrified me. What would I do? Just leave? What if I couldn’t pull the door open? Where would I go? Or what if I had an even more unpleasant surprise—quads and paras know what I’m referring to—what would I do then? How would I return to school with the embarrassment of it all?

All of these worries seem insignificant to me now, especially in light of some of the obstacles that people face elsewhere, but at the time these things were a big deal.

I quickly learned you just have to be creative, try different things and see what works for you. For example, if the disability office couldn’t find me a note taker, I would ask another student who was waiting before class to share notes with me. My professors and I worked out arrangements for me to take exams at home or the DRS office.

With some nudging from Danielle, I eventually transitioned to attending classes alone. I also started buying food by myself, which at first involved the act of handing my wallet to the cashier and asking them to take out the cash. (Having grown up in New York, this felt very strange at first.) I started to plan and prepare for things ahead of time and learned to ask for assistance from strangers, such as, “would you grab my book out of my bag for me?”

For the second quarter I was worried about writing papers and how I would read and highlight or take notes. By using Dragon NaturallySpeaking (a voice dictation software program I’m using to type this essay right now) I was able to complete my papers without too much hassle. The DRS office helped me obtain most of my books in electronic format online, and I was able to use Dragon to jot down notes while reading.

By the third quarter, I was attending classes alone, typing up long papers, and focusing on much more important things, like finding a date.

After the first year, once I was comfortable being a student again, I took advantage of opportunities to get involved in campus activities like the Student Senate, the Student Disability Commission and the school newspaper.

You can’t plan for every contingency, as I would learn, so you just have to adapt and try to mitigate problems when they arise. Unforeseen events came up – wheelchair trouble, like getting your chair stuck in tilt, bad weather stranding you at home, ER visits with a couple of pesky kidney stones, and more – but miraculously the world didn’t end, life rolled on, and things worked out, as they often do.

Things got better with time and I started enjoying my classes and time with peers. Many of my health problems subsided after I learned to deal with the stresses and anxieties that my new condition was producing—the likely culprit of the health issues in the first place.

Eventually I started riding the bus, which made a dramatic difference in my independence as I no longer had to depend on others to drive me around. Gradually I made more friends, met interesting people from different places, and finally discovered there is a world out there waiting for me.

Some have considered my story extraordinary but I would disagree. It’s important to remember that the adversity I faced was tiny compared to what many people around the world with (and without) disabilities have faced long before I was around. I have been and continue to be very privileged, riding on the coattails of the activists who actually fought for change—those who helped push for the Americans with Disabilities Act for example—and who paved the way for me and others.

There were times, many times in fact, that I felt things weren’t going to work out. And many may feel as hopeless about their situation now as I did back then. I just hung in there seizing opportunities as they arose. And the opportunities did arise, not from thin air but often from thoughtful and caring individuals – many times strangers – who gave a little piece of themselves so that I and others could grow. I think there is a lesson in this.

Whether it’s getting back to school, work, volunteering, or just getting out of bed, the opportunities are there for us. There’s never been a better time than now.