Building a Life after Teenage SCI 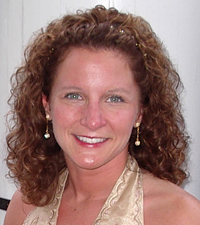 Tammy Wilber was an athletic, outgoing 17-year-old on the summer day in 1993 when her life changed in an instant. While driving with friends to soccer camp, a distraction—a bee flew in the car, causing shrieking and commotion among the passengers—took her attention from the road. The road curved, the car flipped, and, not wearing a seat belt, she was ejected.

“I remember being on the ground, wide awake,” she recalls. “I knew something was wrong. I told people, ‘Don’t move me. Get help.’”

Soon after arriving at the hospital, she had emergency surgery to remove her kidney (damaged when her body was thrown against the steering wheel). Two days later she underwent spine stabilization surgery. She had sustained a complete spinal cord injury at the T5-6 level, but the fog of operations and medications kept full awareness of her situation at bay for a few days.

“I started realizing things were serious about the time I was moved from the ICU to a regular hospital room,” she remembers. “When they brought me a big blue wheelchair, I thought, ‘This is real? This is really happening?’ This was the moment I knew I was paralyzed and had my first big cry.”

For most people, the adolescent years are turbulent enough without adding trauma and permanent disability to the mix. Suddenly the path toward independence and identity takes a detour. The vision you had for yourself no longer looks like the person in the mirror.

Understandably, Wilber’s return to high school in her senior year was difficult. “People were shocked to see me,” she recalls. “I had lost a lot of weight. My hair had fallen out while I was in the hospital (a reaction to medications) and was just starting to grow back, so I looked really different. To me, I looked and felt like an unhealthy person.” This was a dramatic change from pre-injury, and her self-image took a beating.

Gradually, the stares and awkward questions from peers diminished, and she eased back into a subdued version of her previous social life. “I was limited in my activities because of accessibility reasons, bladder and bowel issues,” Wilber says. “It took so long to do everything. So it was just easier for my friends to come over to my house.”

After graduation, “My friends went off to college, and I started feeling left out,” Wilber says. So she went to the Shriners Hospital in Philadelphia to take part in a functional electrical stimulation (FES) program for walking. “I lived at the hospital for six months. It was very therapeutic because it was a transition, going away from home like my friends who went to college, and because for the first time I was around a lot of people with disabilities. I made friends with people all around the country. My roommate was a paraplegic. It was kind of fun.”

The FES program involved implanting electrodes in her legs to stimulate her muscles to walk. While it provided good exercise, strengthened her muscles, and allowed her to stand to reach for things, it was too exhausting for regular ambulation and required occasional repair surgery trips to Philadelphia. Once Wilber started at the University of New Hampshire, these trips became too disruptive. She had the electrodes removed three years after their initial implantation.

Meanwhile, college life had plenty of its own challenges. “I had a hard time adjusting,” she admits. “That first winter was horrible—the snow, dorm life.” Self-conscious about her personal care needs, she did her bowel program in the middle of the night, when no one was in the bathroom. Having given up her childhood dream of becoming a nurse, she was at loose ends, switching majors often, transferring to Florida State in her sophomore year, and then dropping out as a junior.

That turned out to be an empowering move, however. She wanted to try working but wasn’t sure of herself, so she started volunteering at a recreation organization for people with disabilities. “It was a great way for me to gain job skills and the confidence that I could work,” she says. She was soon hired as a part-time administrative assistant.

Wilber had come a long way—she was independent; she could drive and play sports—but at the five-year anniversary of her injury, depression began undermining her equilibrium. She went to a counselor, who offered this observation: “You never really mourned the loss of the use of your legs.”

“It suddenly hit me how right she was!” Wilber recalls. “I had been all ‘go, go, go!’ I felt I needed to be superwoman, to prove myself.” Counseling helped her come to terms with her loss and let go of her compulsion always to overachieve.

Fast-forward to the present day, and Wilber is a Seattle resident and full-time marketing manager for VARILITE, a wheelchair seating company. “This job is something I have been working toward, “Wilber said. “Although I never became a nurse, I am still connected to the medical and disability communities. I feel very fortunate to be working for such a good company.”

She doesn’t kick back during her off-work hours, however. “Volunteering has been my passion since high school,” she admits, especially when it involves helping others with disabilities. In addition to serving on the boards of PROVAIL (a non-profit service agency for individuals with disabilities) and the Northwest Regional Spinal Cord Injury System (NWRSCIS), she has been a longtime peer mentor to newly-injured SCI patients at the University of Washington. “Peer mentoring is so important,” she says. “So many people helped me the first few years. Being able to see someone who’s been injured 14 years and see that it’s not the end of the world, it’s huge.”

Wilber helped start an online women’s wheelchair support group that connects women with SCI throughout the Northwest. They share information and experiences about the nuts-and-bolts of living with SCI and even manage to convene periodically in person for social activities. Since only 25% of the SCI population are females, Wilber feels it is especially important for women to find ways to support each other. “It was almost six months after my injury before I talked to another girl with SCI. She was a huge influence. There are so many female issues. To be able to share that information and support is really important.”

In the same spirit of reaching out, Wilber was crowned Ms. Wheelchair Washington in 2006, a title that is more about community service than ball gowns and makeup (although they do have fun! See photo.). She made volunteering her platform for the year: “I called it ‘VolunteersAbility,’ because everyone has the ability to be a volunteer and make a difference.” This year she is the (volunteer) Washington State pageant coordinator and mentors the current title-holder.

Somewhere in the midst of all these major volunteer commitments and working 40-plus hours a week, Wilber still makes time for other community service opportunities that arise, such as helping gather medical equipment for persons with disabilities in third-world countries through The Mobility Project; participating as a study subject in SCI research projects (see the Spring 2005 SCI Update article at http://sci.washington.edu/info/newsletters/articles/05sp_arm_shoulder.asp ); and speaking about disabilities to businesses and schools.

Wilber’s most recent accolade comes from the Washington State Governor’s Committee on Employment and Disability: She was awarded the 2007 Governor’s Trophy for “empowering leadership, removing barriers to employment, and improving access to programs and services.”

As a member of the NWRSCIS Community Advisory Board, Wilber helps plan and coordinate the monthly SCI Forums, serves as a forum greeter and frequent panelist, and advises staff on ways to improve the UW’s SCI services. Fellow board members and NWRSCIS staff agree that her insights, enthusiasm and energy are invaluable.

Her advice to others with SCI? “Patience,” she says. “Take one day at a time. For me, it’s been 14 years. I didn’t get to where I am overnight. Take one step at a time—one wheel at a time—focus on now. Don’t worry so much about the future.”