Working to Walk (W2W): A Day with SCI Cure Scientists

The story of the 4th annual Working to Walk (W2W) Rally for a Cure in Washington, DC, begins on October 10th, 2004, the day Christopher Reeve died. He had been the most famous quadriplegic in the world, and his death devastated the people who had come to depend on him as the public face of SCI and its most passionate voice for a cure. With Chris Reeve gone, who would speak for people living with spinal cord injury?

In the first weeks after his death a small band of women who had known one another only through the CareCure internet message board came together to pick up where he left off. From their computers around the United States, they created a new entity: a group they called Unite to Fight Paralysis (U2FP). Their first project was a one-day rally in Washington DC, which they pulled off—with a little help from the Christopher Reeve Paralysis Foundation—just six months after Reeve’s death. Each year since then they’ve expanded and strengthened the event. W2W now includes corporate sponsors, big name speakers, a day-long science symposium, tips and tools for meeting with legislators, and most importantly a chance to lift the burden of isolation and helplessness. At W2W, people learn to become advocates.

This article is focused on the first day of W2W 2008—an encouraging, demanding day spent learning about the most promising areas of research from the people closest to the action. There was plenty of good news for a community that has heard little but promises. The basic puzzle of repairing the injured spinal cord is well known: when a cord is damaged, it becomes like a pocket of scorched earth. Scar tissue forms a barrier thick as rock. Axon growth inhibitors and myelin killers appear like tenacious weeds; there are few “seeds” left alive from the original neurons, and the soil itself is barren of the proteins that once nurtured the original cord into being. The strategy for restoring function, say scientists, will require a delicately calibrated combination of attacks aimed at overcoming all of these problems. What we heard at W2W is that the research community is rapidly closing in on that calibration.

For example, Dr. Stephen Davies of the University of Colorado is attacking two issues at once: breaking up the rock of scar tissue and seeding the injury site with meticulously differentiated cells that get axons growing. In 2007 he reported that his lab had succeeded in repairing the cords of lab animals with cells called astrocytes—star-shaped cells that appear at one of the 4th-level divisions of the giant, complex tree of cell development. Nine out of nine animals treated with these cells were back to normal movement within a month. Dr. Davies planned to use the astrocytes in combination with a substance called Decorin (produced, he said, “in bucketfuls” by the human body) that has the power to break up scars in injured spinal cords. His path thus leads to a treatment for both chronic and acute injuries: develop the correct type of astrocytes, combine them with Decorin, and do the trials. Said Davies last year in his brisk British accent: “I’ve been in the field for seventeen years, and the material I showed you today is the first time I’ve been able to say that I’ve really got something.” One year later, his excitement over new findings could be felt across the room.

He had accomplished three important goals since we saw him a year ago. First, he tested his astrocytes to make sure they would not cause neuropathic pain (a common and difficult problem in many cell therapies). The result was just what he had hoped: his astrocytes are pain-free. Second, he tried putting adult sensory neurons right on adult spinal cord myelin and adding Decorin; the neurons grew five times as fast as they would have with no Decorin. The Decorin seemed to be acting as a kind of fertilizer, but what would happen when the neurons-plus-Decorin ran into the “weeds," the growth inhibitors? The neurons grew 14.5 times faster—almost 3 times as fast as when there were no growth inhibitors. Dr. Davies had shown that it’s possible to create safe, pain-free cells, add them to Decorin, and watch them grow like blazes, even –especially—in the hostile environment of growth inhibitors.

What are the next steps? Develop more efficient ways to make the astrocytes, test them on injured animals in combination, then test them in both acute and chronic injuries. He reminded us that his original work in finding the astrocytes was funded by a NIH grant, and that in the current environment that grant would probably not have been funded. SCI research needs federal support if it’s going to happen. 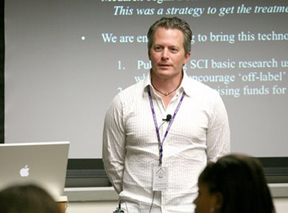 Someone who took an entirely different approach was Dr. Hans Keirstead of the Reeve-Irvine Research Center, who has been partnering with Geron, the company that initially funded the effort to isolate human embryonic stem cells at the University of Wisconsin in the late 1990s. Geron has spent the past ten years working to create a safe, readily available source of embryonic stem cells in what must be described as a hostile political environment. The image that comes to mind when thinking of Geron is that of a small company trying to build the interstate highway system. They decide the routes, design the bridges, choose the substrate, mix the concrete, pour the asphalt—and they do it all very, very slowly. The inefficiencies of such a process are obvious, which may be why Dr. Keirstead has chosen to “piggyback” his therapies for SCI onto studies involving other patient groups.

One example is the idea of growing motor neurons and using them to repair one muscle group at a time. He holds up his right hand and moves his thumb back and forth to demonstrate: this muscle, maybe. He says that they’ve figured out how to create an inexhaustible supply of motor neurons in the lab. “We can grow one to 10 billion cells a week of these things . . . any one human is going to take a few million.” He plans to run his safety and efficacy trials for this treatment in two kinds of terminal conditions: infantile spinal muscular atrophy (SMA) and adult amyotrophic lateral sclerosis (ALS, sometimes called Lou Gehrig’s disease). Why? Because the FDA would require the study to follow the patients for a lifetime, and the expected lifespan in these diseases is shorter than in SCI. This strategy will speed up the process of getting closer to trials in SCI patients.

That depends on all of us as much as it does on the men and women in the labs. Here’s how U2FP co-founder Marilyn Smith thinks of it: “It’s our job as advocates to educate the public, to talk with our scientists, to educate ourselves, to communicate with the media, to communicate with our politicians, to spread the word that a cure is possible, and it’s imperative to find it. No one should have to live with paralysis.” She’s right. In a rational universe, people already struggling to live with SCI would not have to take on the task of working to cure it. In the real world, though, we do have to. It is our job. What Marilyn didn’t say was something all of us learned as the hours of W2W flew by: advocating is great fun, especially when you do it with your friends, properly armed with real-time information from credible scientists. If the clinical trials don’t pan out before next April, we’ll be back for W2W 2009. We’ll be stronger and better educated, and there will be a lot more of us.

Kate Willette’s husband, Bruce Hanson, sustained a C-6 injury in March, 2001. Both of them are active in the movement for a cure. Kate posted live on the Care Cure Web site (http://sci.rutgers.edu/) from the Working to Walk 2008 conference in April. She is the author of a popular memoir about her family’s first year following Bruce’s injury, Some Things Are Unbreakable. She lives in Bellevue, Washington.