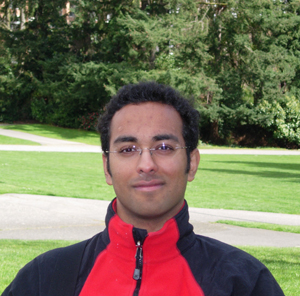 Aditya Ganapathiraju uses the word “interesting” to describe his life so far. Born in southeastern India, he was two when his father died, six when he immigrated with his mother to the U.S., 17 when his mother was killed in a car accident, and 18 when he sustained a traumatic C-5 spinal cord injury. Despite this chronicle of loss and hardship, Aditya, now age 25, radiates an upbeat, optimistic attitude about life and expresses genuine appreciation for how fortunate he is.

Aditya lives in Seattle now but had been living in New York for almost a decade prior to his injury. His mother had a PhD from India and held a research position at a university hospital on Long Island, where Aditya attended school. He was a high school senior when his mother died. Without other family in the area, he moved in with friends, finished high school and went on to Nassau Community College.

On September 12, 2002, soon after starting his second year of college, Aditya was involved in a motorcycle accident blocks from his house as he was returning from school. He has no memory of the event, or the day, or the couple of weeks afterward, but he vividly remembers his rocky rehab experience. After trauma and ICU care at a county hospital, he transferred to Mount Sinai’s rehab program, where his lung collapsed, sending him into the ICU for three more weeks. He was unhappy in the rehab program, partly because, on top of adjusting to his injury, he had no family in the area. As soon as he could be transferred, his uncle and aunt flew him to Seattle, where they were living for a year during his uncle’s sabbatical, and Aditya spent the next five months at the University of Washington Medical Center.

Looking back at that first year or two after injury, Aditya remembers being deeply despondent. “I was pretty down and feeling sorry for myself. I didn’t want to leave my room in the hospital, and that didn’t change much after discharge.” His uncle and aunt had moved back home to Georgia, and when Aditya was discharged he started living in a series of adult group homes in Seattle.

Aditya describes his time in those homes as “dormant. I felt isolated, without peers to talk to, and spent most of my time watching TV. I had lost all motivation to do anything productive, like reading.”

“You set up mental obstacles for yourself,” he says now. “You say, ‘I don’t think I can do that,’ and you close the door before you try.” He wanted to go back to school, but didn’t know how to make that happen. Formerly a highly-motivated, positive and self-disciplined young man, he struggled to figure out how to remake himself and feel hopeful about the future.

“When you find yourself suddenly unable to do even the most basic things for yourself, it’s tough to just say, ‘well, that’s okay,’ and move on with life,” he admits.

It takes time, and it happens gradually. In March 2005 things began to turn around. He needed to leave the group home he was in, and through connections he had made in rehab and some lucky timing, he was able to move into a private home, newly remodeled for accessibility, with a family whose son was also recently injured with quadriplegia.

Over time, with the steadfast support and encouragement of friends, family, University of Washington (UW) therapists and nurses and the example of others with SCI, Aditya began to take the steps necessary to move forward with his life. He enrolled as a UW student in 2005, taking only one class at first. UW rehabilitation counselor Curt Johnson helped him go through the process of getting disability accommodations such as note takers, electronic text books and voice-activated software.

Although he owns a van, Aditya prefers to commute to the UW by bus. “It works for me,” he insists. “I’m a bit of an environmental nut, so I don’t like cars anymore anyway.” His bus ride to school is about 30-40 minutes and allows him to “catch up on reading.”

Aditya describes his life now as busy and satisfying. In addition to taking a full class load, he writes regular editorials and a column for the UW’s student newspaper, The Daily. He is active with the campus Student Disability Commission and represents this group on the UW’s Student Senate, attending weekly Senate meetings. He serves as a peer mentor for newly injured SCI patients at the UW and has also been a volunteer at Children’s Hospital and Regional Medical Center. Last year he joined the Northwest Regional SCI System’s Consumer Advisory Board. On top of all this, he maintains the typical college student’s busy social life, hanging out with friends, dating, and so on.

Aditya is quick to credit others for much of his success in adjusting to SCI and getting back into a full, productive life. “It would be wrong for me to take credit for how I’m doing today and say, ‘well, it was all a lot of hard work on my part,’ or ‘you just have to make yourself suck it up and move on,’ because I had lots of help along the way. Without that help, without people pushing me, I wouldn’t have been able to push myself to where I am now.”

A significant underpinning of Aditya’s positive attitude about life is his genuine appreciation of the good things he has going for him compared to many others in the world. “So in Ghana, for example, people with disabilities are relegated to the role of beggar just to survive. I think we’re very fortunate in this country, and it helps to be reminded of that. Sometimes you don’t want to hear it, but I’m glad I’m in a mental and emotional place where it’s meaningful to me now.”

Aditya finds inspiration in the words of the eminent physician and Holocaust survivor, Viktor Frankl, whose loved ones perished in the concentration camps and who wrote in his renowned book, Man’s Search for Meaning: “Most people in a concentration camp believed that the real opportunities of life had passed. Yet, in reality, here was an opportunity and a challenge. One could make a victory of those experiences, turning life into an inner triumph, or one could ignore the challenge and simply vegetate.”

Frankl also wrote about meeting a man with quadriplegia who made this statement: “I broke my neck, it didn’t break me.”

“That’s the attitude I hope to live up to,” says Aditya.

Another favorite quote comes from acclaimed Russian novelist Fyodor Dostoevsky, who wrote, “There is only one thing that I dread: Not to be worthy of my sufferings.”

“This is helpful to me,” Aditya says now. “I don’t think about my injury in the same way anymore. It’s so miniscule in terms of the suffering that so many others have had to face and continue to experience.”

“I wish I had read these words right after I was injured. Although, given my state of mind, I don’t know how much good it would have done at the time.”

“Making the world a little bit better is what gives my life meaning,” he continues. “It’s what motivates me. I can’t help the people who helped me after my injury, but I try to do my part to give back, effect social change through various means—right now it’s student government, writing for the paper, volunteering. Tomorrow will hopefully be something better. The opportunities are out there; life’s waiting for you.”