Life after SCI: A Mother's Story 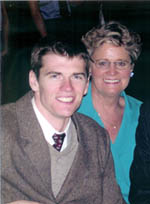 A week after her son, Billy, started his freshmen year at the University of Washington, Jill Price got the kind of call every parent dreads: Billy had fallen from a third floor sleeping porch at his fraternity and was now at Harborview Medical Center, critically injured. The fall broke his neck at the sixth cervical vertebrae, rendering him a quadriplegic. He was 18, an athlete, and beginning what should have been the best time of his life. At that moment-nearly 10 years ago-his life changed forever, and Jill began her own difficult journey as the mother of a young man with spinal cord injury.

"I still get very emotional about it," the Eastside mother says now. "It was overwhelming-the fear, the anger, the loss. The grieving never goes away completely." Catastrophic injuries such as SCI throw the entire family into turmoil. Shocked, grieving and anxious parents are suddenly thrust into a bewildering new world of medical care, hospital personnel, health insurance and financial strain. Having once launched their child, they often must resume, at least temporarily, the role of caregiver. It can take an emotional toll on parents. "You're stunned," Jill recalls. "You just can't believe it's happening."

Billy was in the hospital for six months. During rehab at the UW, hospital staff connected him with the UW's Disabled Student Services so he could return to school after discharge. These services ensured that he could access all his classes and provided a note taker. When one of his classes turned out to be on an upper floor of a building without an elevator, the entire class was moved. "They (Disabled Student Services) were so helpful. The services were great," Jill says. "I'm so grateful to all the people before us who fought for these rights, because we have benefited from it."

When Billy came home from the hospital, Jill was his personal caregiver and chauffeur during the week, and Billy's father took over on weekends so Jill could continue her job as a flight attendant. Life was moving forward and the family was coping, but the depression that Jill had developed after Billy's injury continued to intensify. "All my friends and family were watching me," she recalls. "They told me to get professional help, but I was in denial. It's like post-partum depression-if you can't cope, it must mean you're an inadequate mother. So I put on a phony front." Billy was getting counseling when needed from UW psychologists, but Jill declined help.

By September, almost a year after the injury, "I hit a wall," she says. "I was sobbing constantly, and angry, and just fell apart emotionally." She remembers two things that finally convinced her to get counseling: one was Billy entreating her to "please, mom, get help;" the other was a questionnaire for people in crisis that someone had dropped in her mailbox. "It had five questions. If you said 'yes' to one of them, you were in trouble. I said 'yes' to all five," indicating she was at risk of suicide.

Jill found a psychiatrist-"I insisted on seeing someone who was a woman and a mother!"-and started taking anti-depressants. "I always tell people-'thank God I got therapy!'" she says now. "When you're so severely depressed, medication helps you function and focus." Now when she meets families of newly injured patients, she tells them her own story, and advises them to pay attention to possible symptoms of severe depression, and "not wait as long as I did to get help."

A year after his injury Billy moved back to his fraternity, which had been remodeled for wheelchair accessibility. A nursing student was hired to be his caregiver, paid for by the State Division of Vocational Rehabilitation. Billy has since moved back home, graduated, and now works full-time as a mechanical engineer for the Federal Aviation Administration (FAA). He has an adapted van and drives himself to work. His parents continue to be his primary caregivers, but Billy plans to move to his own place and hire daily care attendants.

Part of Jill's journey of healing has been her ongoing connection with the SCI community. Both she and Billy serve as resources to newly injured patients and their families by visiting them in the hospital, answering their cascade of questions, and sharing information and experiences. Billy benefited from similar visits from SCI peers when he was first injured. "Billy saw what they could do, with the same injury level and same function as him, and realized he could do that, too," Jill remembers. One of these SCI peers not only had a job, a wife and kids, and drove a car, but he even played quad rugby. "It encouraged him," she says.

Jill heard about the SCI Forums-the UW's monthly presentations on SCI-related topics- while Billy was still an inpatient. Since then, she has continued to attend the forums, "because I always learn something new and important. We went to the forum on pressure mapping, * and it opened up a whole new world," she recalls. Billy, an avid skier before his injury, got back into skiing afterward using an adaptive bi-ski setup. "But every time we took Billy skiing he got a pressure sore." At the forum they learned about pressure mapping technology that identifies seating problems that might lead to skin problems. After getting an assessment for the bucket seat on Billy's bi-ski, "we got a new cushion, and he hasn't had a pressure sore since," she says.

At another SCI Forum, Billy learned about the Access Job Fair for people with disabilities. "Billy went to the Fair, and that's how he got his job at the FAA," she says.

Six years ago, Jill joined the UW's SCI Consumer Advisory Board, which helps organize the SCI Forums and gives input into the UW's SCI programs and research activities. Because such a large percentage of injuries occur among young single males, who often must move back to their parents' home and go through a period of dependency after discharge, Jill's perspective as a parent is valuable on the Board.

But Jill downplays the importance of her contribution. "I feel I get more out of (serving on the Board) than I give," she says. "I learn so much (from the SCI Forums), and find out about new therapies and resources. I consider it my support group."

* "Pressure Mapping Assessment for Wheelchair Users," by Kendra Betz, PT, June 8, 2004. Read about it at http://depts.washington.edu/rehab/sci/pressure_map.html.