SCI in Children and Teens

An Interview with Dr. Terry Massagli

Terry Massagli, MD, is associate professor and residency program director in the UW Department of Rehabilitation Medicine and specializes in spinal cord injury rehabilitation at Children's Hospital and Regional Medical Center. Children's, along with University of Washington Medical Center (UWMC) and Harborview Medical Center (HMC), is part of the Northwest Regional Spinal Cord Injury System, one of 16 federally funded Model SCI Systems in the country. 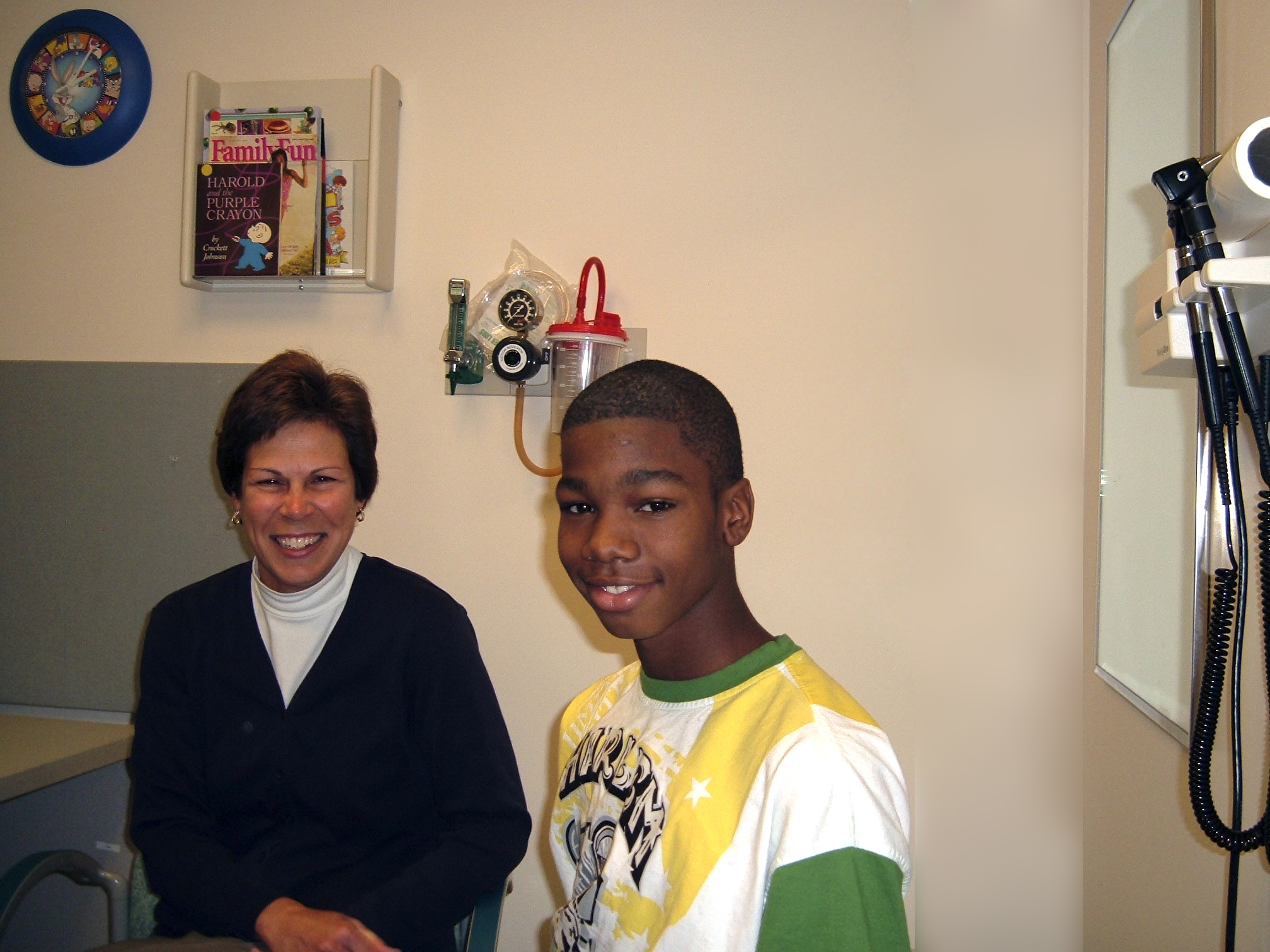 These numbers also leave out children with non-traumatic SCI from medical conditions such as transverse myelitis, spinal cord infarct and spinal tumors. Such patients have virtually the same rehabilitation needs as those with traumatic SCI. In the 16 years I have been at Children's, we average about 10 new patients with spinal cord injury or disease each year; about half of these have traumatic SCI.

The top etiology (cause of injury) for all ages (adults and children) is motor vehicle crash (MVC). The second highest cause varies by age group: medical/surgical complications in children 0-5 years; violence in ages 6-12; sports in ages 13-15; and violence again in ages 16-21. In persons over 21, falls are second, followed by violence. Looking at the 0-15 age group as a whole, the top three causes are MVC (44%), followed by sports (23%) and violence (21%).2 Sports and violence drop off dramatically as a cause of injury in older age groups, and falls become more common.

Over the last 30 years, the percent of injuries due to MVCs has increased in the 0-15 year age group while violence has decreased. Within sports, diving has remained the top cause, but the percent of cases due to both diving and football have decreased, while those due to skiing have increased. In the 1970s, 6.4 % of all new cases occurred in kids ages 0-15, but this has steadily declined to 2 % in the current decade.

There is a higher incidence of paraplegia than tetraplegia (quadriplegia) (65% vs. 35%) in kids under 12, which reverses to the typical adult ratio (45% vs. 54%) in teens. Kids age 0-5 have about 67% complete injuries, and from 6-12 about 62% complete. These percentages decline to the typical adult ratio (about 56% complete and 44% incomplete) in older groups. The greater occurrence of complete injuries in younger children reflects the relatively less stable vertebral column compared to the large size of a child's head. The bones are not yet completely ossified (hardened) and the ligaments and spinal muscles are not as strong as in adults, resulting in more damage to the spinal cord with trauma.

While Children's will provide care for young adults up to their 22nd birthday, much of the decision depends on whether the teen has finished high school. Patients between 15 and 18 years old who are still in high school can benefit from the educational resources at Children's, where full time teachers employed by the state of Washington provide ongoing tutorial support during the rehabilitation stay and help plan for the child's return to school. If teens have completed high school, the vocational rehabilitation services at HMC and UWMC may be more appropriate. But we encourage these families to visit Childrens, HMC and UWMC to see where they feel they will be most comfortable during the 5-8 weeks of probable inpatient rehabilitation stay.

Many of the special problems in pediatric SCI relate to the fact that children haven't finished growing. A prime example is scoliosis (abnormal curvature of the spine), which occurs in virtually 100% of kids injured before puberty. Bracing can help to improve sitting, balance and function, but it does not reduce the extent of scoliosis, and children need to be followed by orthopedic surgeons to determine if surgical fusion may be needed.

Another special issue is bladder capacity. Children do not develop a normal adult-size bladder until about age 10. If a child is injured at age four, the bladder may not grow sufficiently to achieve adult capacity, resulting in incontinence or other problems when the child grows up. Fortunately, bladder augmentation resolves this problem and has been a huge benefit for many of my teenage patients.

Children have a lower incidence of heterotopic ossification (abnormal outgrowths of bone) than adults and a higher incidence of hip misalignment. Adolescents are especially prone to immobilization hypercalcemia-an elevated level of calcium in the blood that can cause nausea, fatigue, depression or kidney stones if untreated.

A large number of our patients with high tetraplegia who use ventilators have opted for placement of phrenic nerve pacers (surgically implanted devices that stimulate the nerves to the diaphragm), a less cumbersome and more appealing alternative to ventilator tubing. The children still have back up ventilators for night time use, periods of illness, or in case of pacer failure.

A child's adjustment is strongly affected by the parents' ability to cope, so it's essential for us to address the parents' emotional needs as well as the child's. A certain amount of grieving for lost hopes and dreams is normal for both child and parents, and our rehab psychologists work with families to help them acknowledge these feelings and move on to the practical concerns of rehab and planning for a positive future.

There have been no studies examining whether children have a higher or lower incidence of post traumatic stress disorder, depression, or adjustment problems after SCI compared to adults. However, adolescents are probably at greater risk than younger children for psychological concerns after SCI because of issues of sudden dependency, concerns about appearance and sexual function, and lost roles such as participation in team sports. We make it a priority to reconnect kids to their peers, activities, and adapted sports as soon as possible because participation in the community is a key factor in making a good adjustment and sets the stage for life satisfaction in adulthood.

We also monitor the child's reaction to disability as he or she ages, because new concerns may arise at crisis points (family or school stress) or at later developmental stages. Our psychologists can provide ongoing consultation or referral for counseling for children and teens via our outpatient clinic.

Certainly they can. Research shows that positive outcomes and life satisfaction in adulthood after childhood SCI are more strongly related to functional independence and involvement in community-factors over which patients and families have some control-than to injury level or severity.3 It is our job in rehab to help families realize this and plan for the future by maximizing education, participation, and independence.

Persons injured as kids, along with their support systems (counselors, family, etc.), can begin early on thinking about jobs that will be within the child's capacity to perform and about the associated educational requirements. It is interesting to note that adults who sustained SCI as children attain higher education levels than adults in the general population. Furthermore, persons with childhood injuries have a higher employment rate than those injured as adults.

A parent once told me the most valuable thing she learned when her son was on rehab was that once the physical barriers were removed, there was so much he was still able to do. She was a model parent for making their home and transportation accessible to him and for advocating for him in school and sports. He's now a successful college student and competitive wheelchair athlete.

We tell families and patients that they can stay in our system until the day before their 22nd birthday. However, we strongly encourage them to transition their care at the time of high school graduation. We often begin by a referral to UWMC for a specific consultation, such as vocational rehab or urology. Then we get them to transition for all their care. That said, I have a couple of patients who are off at college and older than 22 who still ask me to sign their supply prescriptions each year.

(For resources about transitioning to the adult health care system, go to the UW's Adolescent Health Transition Project http://depts.washington.edu/healthtr/ or call 206-685-1358).

Clearly prevention efforts are working, as seen in the decline in diving and football injuries. Since the greatest frequency of injury is related to the motor vehicle, the largest payoff will be with proper restraint use. Adults and teens and older kids need shoulder lap belts. Kids under 40 lbs need to be in a car seat, and those weighing 40-70 lbs should use a booster seat to allow proper placement of the seat belt across the clavicle and pelvis, to avoid injuries to the neck, abdomen, and lumbar spinal cord.

For more information about the SCI clinical services at Children's Regional Hospital and Medical Center, call the Rehabilitation Clinic at 206-987-2180.