Presented by Don Fogelberg, PhD, and Stephen Burns, MD on February 12, 2012 at the University of Washington Medical Center, Seattle, WA.

Presentation time: 80 minutes. Part 1 (sleep problems) runs for the first 19 minutes 20 seconds, followed by Part 2 (sleep apnea) for the remainder of the video.

You can also watch this video on YouTube with or without closed captioning.

For a complete list of our SCI Forum videos, go to http://sci.washington.edu/info/forums/forum_videos.asp.

By Don Fogelberg, PhD, Assistant Professor of Occupational Therapy in the Department of Rehabilitation Medicine, University of Washington.

Why is sleep important?

Sleep is essential for health, and not getting enough sleep can have serious negative effects on your health and your cognitive (thinking) function.

The fact that obesity, diabetes and CVD are among the top causes of death in the U.S. highlights the critical importance of sleep.

These disorders occur when our internal body clock that governs our sleep-wake cycle gets out of alignment with the normal 24-hour day. Our internal clocks normally run on a slightly more than 24-hour cycle, but are constantly reset by visual cues of light and dark, as well our meal and exercise schedules.

Treating CRSDs usually involves resetting the internal clock by means such as light exposure, physical activity, or taking melatonin, a hormone that helps regulate sleep. There are six major types of circadian rhythm sleep disorders, and all of them result in excessive sleepiness and lack of daytime alertness.

Insomnia is defined as difficulty falling asleep, staying asleep or both, resulting in insufficient or poor quality sleep and daytime sleepiness. This can be an acute, isolated case lasting only a couple of nights, or a nightly problem that continues for years. Insomnia is very common, affecting approximately 33% of the U.S. population. It is considered to be one of the most common psychological problems in the US today.

Insomnia is often considered to be “secondary” because it so often occurs along with other medical conditions. Many medical problems could lead to difficulty getting enough sleep, including pain, physical or neurological disorders like arthritis, chronic bladder infection and Alzheimer's disease. Psychological disorders—depression, anxiety, panic attacks—are also associated with poor sleep.

It is also possible to have an insomnia problem caused by a treatment for another disorder. For example, inhalers for asthma can actually have a stimulant effect and keep you from sleeping well. And insomnia may be a result of another sleep disturbance like a circadian rhythm disorder. The idea with secondary insomnia is that if you treat the secondary condition, the insomnia will go away on its own. But that isn’t always the case.

An emerging consensus among sleep researchers is that insomnia really needs to be thought of as a disorder in its own right and treated as such. We know that the symptoms and consequences of insomnia are relatively consistent regardless of what disorder it's associated with. Meanwhile, the course of insomnia is often different from that of the associated disorder—your arthritis or the pain might get better, but the insomnia can continue or even get worse. And the same treatments are effective for insomnia regardless of what else is going on. In some cases, treating the insomnia by itself may make it easier to treat depression, pain, or other co-occurring conditions.

So, sleep researchers are now saying that we need to look again at insomnia and not just assume that it's something that will clear up whenever the associated condition clears up.

Why is sleep affected by SCI?

Several conditions common to SCI may make sleep more difficult for this population:

Guidelines from the American Sleep Association:

By Stephen Burns, MD, Associate Professor and physiatrist in the Department of Rehabilitation Medicine at the University of Washington and Director of the SCI Service at the VA Puget Sound Health Care System in Seattle.

Sleep disturbances can be a minor inconvenience with a small effect on quality of life, or it can be a big problem that overwhelms a person’s whole life.

To be refreshed and alert in the daytime, we need enough hours of sleep and minimal interruption so we can go into the deep phases of sleep that are most restful, including the dream—or REM—phase. When we sleep well, we can be alert during the daytime, have enough energy to participate in activities, not fall asleep as we're driving our cars, and stay alert until bedtime, at which point we start to wind down and fall into some nice restful sleep. That’s the ideal.

There are many barriers to getting good, restful sleep after SCI:

Poor sleep causes daytime sleepiness, which in people with SCI can be confounded by medications prescribed for pain, spasticity and neurogenic bladder that also cause sleepiness.

Sleep medicine is a relatively new field usually practiced as a subspecialty of pulmonary medicine, neurology/psychiatry, and otolaryngology, although some internists and pediatricians also subspecialize in sleep medicine. We are learning more about sleep all the time, and it is only a relatively recent discovery that sleep-disordered breathing is so common in people with neuromuscular disorders like SCI.

There are three types of sleep-disordered breathing. Two of them are “apneas”—meaning pauses in air movement during sleep. Obstructive sleep apnea, the most common type, is discussed at length below. Central sleep apnea is a rare form of the disorder, in which the brain “forgets” to breathe. Hypoventilation (known as “chronic alveolar hypoventilation”), also rare, is very slow or shallow breathing rather than pauses in breathing.

What is sleep apnea?

Sleep apnea is defined as having numerous episodes during the night when breathing stops for at least 10 seconds. No air is moving in or out, and this causes a drop in the oxygen level in the body. In obstructive sleep apnea, breathing stops because the soft palate and tongue have flopped back and blocked (“obstructed”) the airway. It is worse when people sleep on their backs because gravity allows the tongue—which is a big muscle—to flop back into the throat. Snoring is usually severe, due to vibrations from air trying to push through the floppy tissues. When the airway is obstructed, the oxygen level drops. The brain senses this and wakes up just enough to take a deeper breath, open up those airway muscles and let some air pass through. More frequent and severe apnea tends to happen in the deepest phases of sleep, which are the phases you need in order to be well-rested.

Obstructive sleep apnea—referred to here as simply “sleep apnea”—is the most important medical cause for poor sleep quality and excessive daytime sleepiness in people with SCI. Sleep apnea can lead to serious health problems such as heart and lung disease. Fortunately, there are treatments available that can dramatically improve symptoms and avoid the negative health consequences.

In the general population, sleep apnea occurs in about three to four percent of males and one to two percent of females. Obesity is the main risk factor in this population, primarily from excess fat compressing the airway. Abdominal fat is a contributing factor because the diaphragm has a harder time pushing against it.

In the general population we know that sleep apnea has several serious consequences:

How is sleep apnea diagnosed? 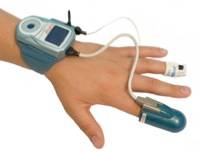 PSG studies take place in a sleep lab. The patient is wired up to various machines and told to fall asleep as usual. Measurements are taken all night long and recorded on a printout called a polysomnograph.

Figure 2. Wired up in a sleep lab. 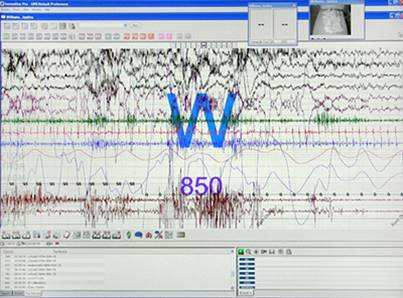 PSG results can tell us:

How common is sleep apnea in the SCI population?

Only a few research studies have been done in this area.

Why is sleep-disordered breathing so common after SCI?

There are numerous potential reasons for such a high rate of sleep apnea in SCI, including:

People with SCI experience the same negative consequences from sleep apnea as anyone else, plus there could be some serious problems specific to SCI: 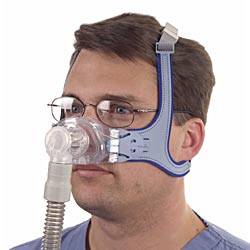 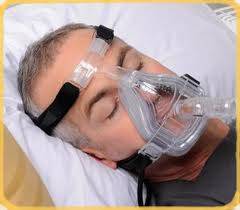 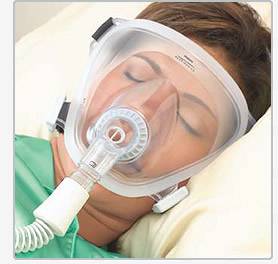 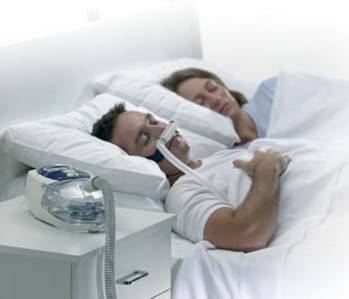 Bi-level positive airway pressure (BiPAP) is a variation on CPAP.

Treatment acceptance
CPAP is very effective, but sleeping with a mask over your face usually takes a lot of getting used to. In a study at the Seattle VA of 40 patients diagnosed with sleep apnea, 20 patients were using CPAP or BiPAP and reported that it was very helpful (average 8.9 in a 0–10 scale) and minimally unpleasant (3.1 on a 0–10 scale). For those patients in the group who didn’t use it, discomfort from the mask was the most common complaint. Some said they just couldn't sleep or sometimes even breathe when the mask was on them. Others said it made them claustrophobic.

There are many unanswered questions about sleep apnea and SCI that need investigating, such as: