NOTE: A more recent (2012) SCI Forum presentation on this subject can be found by clicking here.

Presented on October 9, 2007, by Jelena Svircev, MD, assistant professor in the Department of Rehabilitation Medicine at the University of Washington. Read the report or watch the video from this page.

Osteoporosis, or porous bone, is a disease in which the bones lose density, become weak and brittle, and are more likely to break.

People often think of bone as a static structure, or something dry and non-living. It's actually a very dynamic organ, constantly resorbing, developing and recreating new bone tissue.  In osteoporosis, there is an imbalance between bone formation and bone resorption, leading to thinner, more fragile bones that can fracture easily.

A little background in bony anatomy is helpful for understanding osteoporosis and risk of fractures in SCI.

Long bones are made up of three primary areas (see illustration). 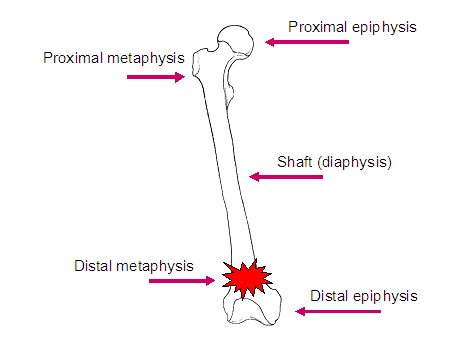 When individuals with SCI sustain fractures, they typically occur in particular areas of the bones, often in the metaphysis or the distal epiphysis.

Bone itself has a number of different components.

Both types of bone become more porous and brittle as osteoporosis develops.

On the left [in the illustration above] is normal bone structure with a very intricate bony microarchitecture. As we move to the right we see that this microarchitecture has been destroyed, leading to a weaker bone.

Normal bone structure is defined as the peak bone mineral density achieved at about 20 years of age, but this varies by ethnicity and gender. Comparing bone density to this standard tells us whether a person has osteoporosis, and if so, how severe it is.

Osteoporosis is a common consequence of SCI. While the most common pattern of osteoporosis in the general population is in the post-menopausal female, who classically fractures in the vertebrae, the hips and the wrist, osteoporosis in SCI is quite different.

As the bone mineral density decreases, the risk of fractures increases. The incidence of fractures of the lower limbs in SCI is high, from 1% to 34% of the SCI population. Most fractures occur not from injury, but from normal activities such as transferring. Sometimes people cannot recall any sort of incident, but just notice a symptom such as swelling that, upon examination, turns out to be due to fracture.

Causes of osteoporosis in SCI

Treatment of fractures in SCI

First and foremost we want to heal the fracture with minimal risk of complication and generally recommend avoiding surgical intervention. We prefer to use soft removable splints, since a plaster cast does not allow you to check the skin underneath for possible rubbing wounds that can’t be felt. It is important to immobilize the fractured area as soon as possible.

In the past, practitioners didn’t think it mattered whether a limb was shortened or deformed after healing in a person who did not ambulate. We no longer think this is acceptable. We need to assess all equipment and activities of daily living during healing and post healing. If a leg ends up in the wrong position as a result of surgery or inadequate follow-up, it may be in an altered position that causes increased pressure when sitting in the wheelchair. Our goal is to maintain pre-fracture functional status; we don't want someone to lose functional independence as a result of their fracture.

Unfortunately, no functional exercise has been consistently demonstrated to be effective in preventing or treating osteoporosis in SCI. Both standing and Functional Electrical Stimulation (FES) with cycle ergometry have been studied, but results so far haven’t shown significant benefit. These activities do have other benefits, however. Standing, for example, can reduce spasticity, improve range of motion and circulation, and provide psychological improvements.

I always recommend that my patients return to as much activity and as large a variety of activity as possible, as long as they do not increase the risk for fractures.

What can we recommend for osteoporosis at this time?

Avoid falls and situations that may increase the risk of fracture. This includes making sure that your equipment is safe, practicing good transfer technique, and keeping the environment safe. If you walk, remove throw rugs and other obstacles that may increase your chances of falling.

I am of the belief that it won't be one thing that will prevent or cure osteoporosis in SCI, but a combination of factors, such as medications along with some other modality or exercise. Overall, as always in SCI, there are many avenues of research that need to be explored.